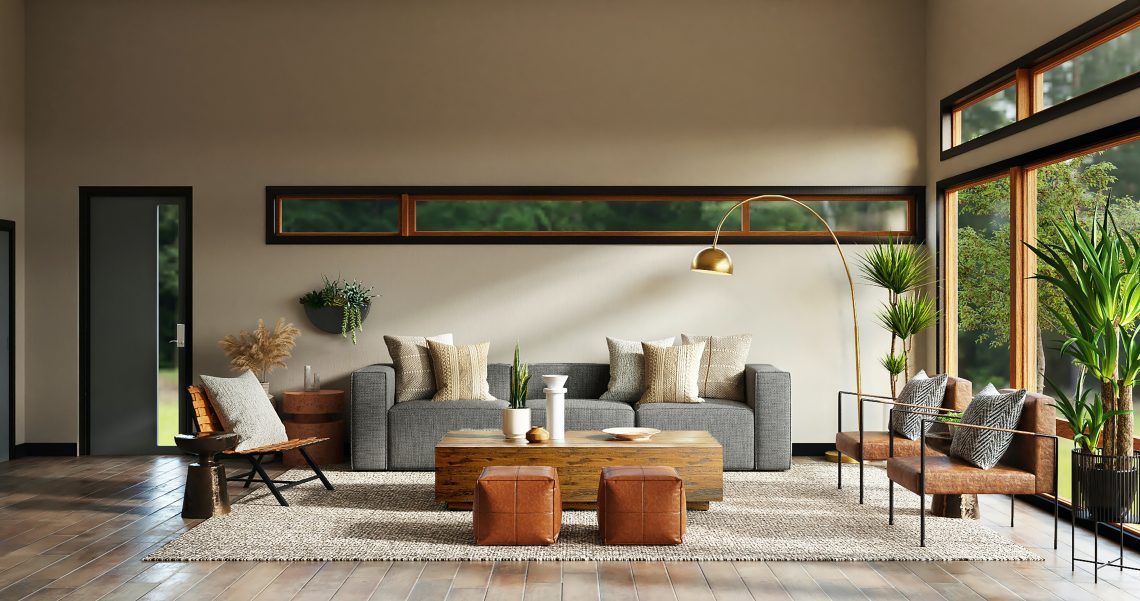 “The rule of three” is one of the basic unwritten laws in interior design. It consists of combining different shapes, colors, and textures as objects of decoration. It is believed that it is easier for us to perceive the decorative composition, which looks harmoniously in the space.

The basics of décor: what is the rule of three

The number “3”: from mysticism to psychology

The origin of the rule of three is connected with many speculations: from esoteric to stylistic. From archaic to modern, the number “3” is assigned a key role in all world cultures and religions. For example, it was associated with the goddess Hecate, who had three heads and three incarnations in ancient Greece. Hecate controlled the most important triads for human existence:

The Christian religion is inconceivable without the number “3”: it symbolizes the divine Trinity. Since childhood, we are all familiar with the three virtues – Faith, Hope, and Love – and the plots of folk tales. Their heroes are often three sons, three daughters, and three heroes, and they live in a trinity of a kingdom.

Occurrences of the significance of the “three” in various spheres of culture are so numerous that the logical idea of its connection with human perception comes to mind. Interior design is no exception. The rules of the three objects, colors, and thirds are used here.

For our psyche, any composition is an integral structure whose decorative properties exceed the simple sum of its constituent parts. It is something more, a new image, and such a phenomenon of perception is called a gestalt by psychologists.

In his work Visually Perceived Figures (1915), the Danish psychologist Edgar Rubin graphically demonstrated how human perception separates the figure from the background and how it changes their places. His famous vase is a classic depiction of objects mutually reversing as the eye moves. Depending on the color one directs one’s attention to – makes a figure – one sees either a goblet or a face.

It follows an important property applicable in design: there are no compositions of one or two objects. In the first case, all attention will belong to the object. A coherent unit, superior in characteristics to its constituent parts, will not work. In the second case, two objects are doomed to alternate scrutiny. 3 is the minimum number of objects when the composition looks complete. The trio seems natural or invented spontaneously.

By the rule of three, designers create interiors that guests perceive as a manifestation of the subtle taste of the owners rather than the result of a clear plan. In addition, this principle does not require additional spending: by changing things or furniture in places, you can make significant improvements in the furnishings. Rule 3 can be used in a variety of areas, such as writing essays. You can use 3 writing styles in your academic paper. The website that writes essay for you knows this like no one else. But in this article, you will learn about rule 3, specifically in decorating.

The rule of three things and signs

In general, objects differ by three features: color, size, and shape. To get a composition, they must differ in at least one, and better – in two.

There is also the 3rd approach. Some designers believe that the key to a harmonious combination is the absolute difference of elements of the future ensemble in all characteristics. Thus avoiding repetition and making advantageous use of contrast.

Why use the rule of three

The rule of three is universal. It is applied to the creation of compositions of different scales: from the size of a tabletop to a whole room. This technique allows:

Examples of compositions according to the rule of three.

Let’s break down each case from the table and give examples of the arrangement of objects. It is an easy technique whose intuitive application comes with an observation from a practical standpoint.

The case where objects differ only in size but are similar in shape and color is the simplest. It is not a question of a complete correspondence to the millimeter but of the impression that the composed decor makes at first glance. Three vases of pistachio color, similar in outline but different in height, form an independent composition and decorate the left corner of the dresser. At the same time, they are part of a harmonious group with the bowl and the mirror.

Objects similar in all other respects, except size, usually form sets. According to the matryoshka principle, sets of figurines, candles, vases, mirrors, and tableware are often made, and the unity of the color scheme is understood to be one style or theme.

We will talk about compositions using decorative plates, glasses, and ceramics. It can also be interior amphorae and vases, furniture corners and chairs, and floor lamps. Modern curtains often consist of 3 canvases, harmonious in color. Let’s consider how to make a combination with vintage-inspired lampshades.

The color scheme of goblets is a contrasting triad in a soft version, with adjustments for the properties of glass. This combination is harmonious by default. To not spoil the composition by adding the 4th color, it is necessary to use an object with achromatic coloring. Only white is naturally suitable here.

How the objects’ size remains the same if their shape is different is a logical question. The essence of the phenomenon is a visual perception by the eye. When composing a composition, the shape of objects is determined mentally. To do this, it is simplified into graphic primitives. This circle is oval, square, rectangle, and triangle. Suitable is the one in which the object is inscribed with the maximum number of touchpoints.

Table lamps in this composition are united by a common exotic theme, have the same color, and are about the same height. The lamp with the monkey is lower than everyone else, but the viewer does not notice it because of the pedestal. As for the forms, two rectangles (snake, elephant) and an ellipse are involved.

When only one feature unites objects in an ensemble, it means a transition to a new level of complexity, and the overlapping color is the easiest case to understand.

Objects of different sizes and shapes form the decorative group shown below. The antique vase with the violin fits into a rectangle, the stand with a pear lying on top into a triangle, and the individual rounded fruit into an oval. Thanks to a single theme with pink and orange hues, these elements are perceived as a composition. If you move the pear or the vase, the image remains intact.

Lovers of minimalism can enjoy monochrome compositions. When the form comes to the forefront, the flaws and advantages of the whole structure are visible. It allows you to edit the decorative group without being distracted by mottling. The vases are ideal for beginners to experiment with combinations, and their variety is capable of satisfying the most refined aesthetic demands.

The table centerpiece in the photo on the right and the ensemble on the dresser on the left have similar features. Vases, flowers, a table lamp, and an orange figurine are easy to fit into rectangles of different sizes. Each element has a different color, but together the tones are chosen to form a pleasing combination for the eye. Achromatic shades of gray and white are not used by chance: they are not considered when arranging accents.

One size fits all

This method is less common than all the others because the size unity by default implies the same shape. Visuals can consist of rectangles and ovals, which fit into them, and squares and circles commensurate with them. Ellipses are oriented both vertically and horizontally. Examples from practice:

How to use the “rule of three” in the interior

How to make tabletop compositions

In her book “Style. A Thousand Tricks and Tricks for Designing Any Interior,” Emily Henderson shares a tried-and-true tip hack for composing compositions on horizontal surfaces. You can use it to unobtrusively decorate coffee and coffee tables, nightstands, fireplace shelves, dressers, and consoles.

According to Henderson’s universal advice, a composition should include three things:

It is easy to compose a decorative group based on a common feature: color, texture, shape, and size. It is more difficult based on style or theme. Style features are understood in a broad sense. This includes not only the unity of design but also the origin of the place of manufacture, as well as the historical period. Therefore, it is possible to combine different things decorated with ethnic or vintage motifs and not look for additional similarities.

Accentuate the contrast with the pair

Using 2 identical objects and adding a 3rd that is completely different from them is a task that even a design novice can handle. The multidimensional approach to contrast relies not only on the choice of complementary hues but also on the differences in the shapes: their heights, the nature of the covering, the finish, and the relief.

Several triads are present in this photograph:

Jana Rooheart is a mom of a teenager who combines motherhood and running WowEssays’ academic blog. She writes articles on independent platforms to develop her writing skills.

Photo by Spacejoy on Unsplash 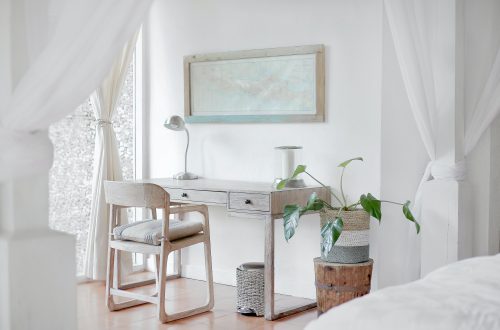 Incorporate These Ideas To Create A Seamless Space 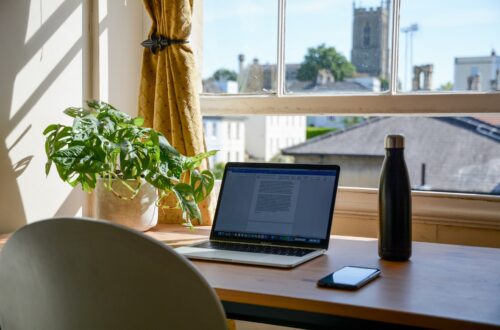 Simple Remodeling Ideas For Your Home Office You Will Like 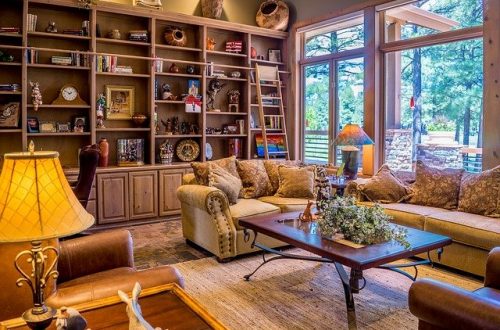